Surgeons in Ukraine Struggle to Operate When the Power Goes Out 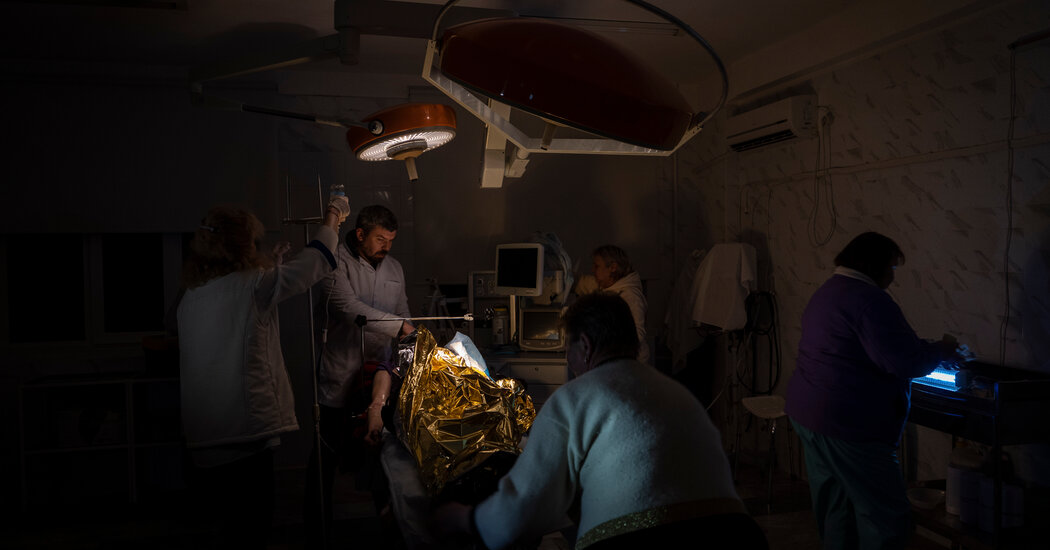 It seems like only yesterday that Republican politicians were being accused of racism or even kidnapping for the...
Read more

Europe|‘Every hour is getting harder’: Surgeons in Ukraine struggle to operate when the power goes out.

The scene in a Kyiv hospital was a vivid illustration of the cascading toll Russia’s attacks are having on civilians far from the front lines.

KYIV, Ukraine — The surgeons had made the long incision down the middle of the child’s chest, cut the breastbone to spread the rib cage and reach the heart when the lights went out at the Heart Institute in Kyiv.

Generators kicked on to keep life-support equipment running on Wednesday night as nurses and surgical assistants held flashlights over the operating table, guiding the surgeons as they snipped and cut, working to save a life under the most trying of conditions.

“The electricity went out completely in the operating room,” said Borys Todurov, the institute’s director, who posted a video of the procedure online to illustrate the difficulties doctors are facing.

“So far we are coping on our own,” he said. “But every hour is getting harder. There has been no water for several hours now. We continue to do only emergency operations.”

Russia’s attacks on Ukraine’s energy grid are taking a growing toll on the nation as the damage adds up. After each strike, repairs become more challenging, blackouts can last longer and the danger for the public increases.

The scene in the Kyiv hospital echoes those in medical facilities around the country, a vivid illustration of the cascading toll Russia’s attacks are having on civilians far from the front lines.

Two kidney transplant operations were being performed at the Cherkasy Regional Cancer Center in central Ukraine when the lights went out, Kyrylo Tymoshenko, the deputy head of the Ukrainian president’s office, said on the Telegram messaging app. The generators were switched on, and the transplants were successful, he said.

“Ukrainian doctors are invincible!” he said.

In the central city of Dnipro, an aeronautics and industrial hub with a population of around one million people, the strikes caused Mechnikov Hospital to lose power, a first since the war began, doctors said.

“We’ve been preparing for this moment for two years,” said one doctor, who requested anonymity because the doctor was not authorized to talk to the news media.

The hospital’s I.C.U. and operating rooms are working on generators, the doctor added, but the living quarters are without power.

Christopher Stokes, the head of Doctors Without Borders in Ukraine, said that the strikes on infrastructure were putting “millions of civilians in danger.” They can feed a vicious loop, in which people living without heat and clean water are more likely to need medical care but that care itself is harder to deliver.

“Energy cuts and water disruptions also will affect people’s access to health care as hospitals and health centers struggle to operate,” he said.

At the Kyiv hospital, surgeons donned headlamps and continued to work in the dark. The operation was a success, Mr. Todurov said.

“Thanks to all the staff for their well-coordinated and selfless work,” he said. “In this unusual situation, we did not lose a single patient.”

A Timeline of Deadly Earthquakes in Turkey

Europe|Monday’s earthquake was as powerful as the strongest recorded in Turkey in 1939.https://www.nytimes.com/2023/02/05/world/europe/turkey-earthquake-history.htmlTurkey, a hotbed of seismic activity, sits on the Anatolian Plate, which...
Read more

It seems like only yesterday that Republican politicians were being accused of racism or even kidnapping for the...
Read more
Politics

Joe Manchin always seems to be stuck between a rock and a hard place on national...
Read more

California approved a plan Friday to make flag football a girls’ high school sport amid soaring popularity of the game and a push to...
Read more

The restrictions could...
Read more

Homeland Security Wants To Protect Us From Foreign Bands

New York Today Mag is your news, entertainment, music fashion website. We provide you with the latest breaking news and videos straight from the entertainment industry.